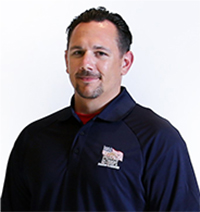 Having previously served in Afghanistan, Army SGT Steven Curry was on his second combat tour in November of 2006 in Iraq, when the vehicle he was riding in with the 2nd Battalion, 35th Infantry Regiment (Cacti), 25th Infantry Division was struck by four explosively formed penetrators (EFPs). The unit was on an escort mission with the Air Force EOD (explosive ordnance disposal) team. As a result of the blast, SGT Curry sustained a traumatic brain injury (TBI) from the explosion and the eventual amputation of his left leg below the knee.

Now medically retired, Steven enjoys cycling and mountain biking, shooting, and spending time with his wife Samantha and their daughter. He’s also a classic cars fanatic and enjoys rebuilding anything that he can take apart. Steve recently completed his associate’s degree and is working in the IT section for his company. He is also the president of HFOT’s Veteran Action and Advisory (VAAT) Committee.