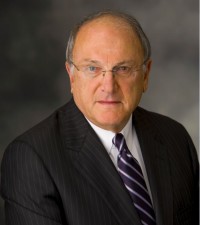 General USA (Retired) Robert W. RisCassi, was a past Corporate Senior Vice President and currently serves as a Consultant for L-3 Communications Corporation.In 35 years of Army service, in which he attained the rank of General, Robert W. RisCassi held a variety of diverse and increasingly vital positions, culminating his career as Commander in Chief of the United Nations Command and ROK/US Combined Forces Command in Korea.

He graduated from the University of Connecticut with a Bachelor’s Degree in History and was commissioned as an infantry officer in 1958. General RisCassi later earned a Master’s Degree in Political Science from Auburn University, and graduated from the Army War College and Air Command and Staff College. Among other assignments he commanded the Combined Arms Center at Fort Leavenworth, he served as Deputy Chief of Staff for Operations and Plans on the Army Staff, and then as Director of the Joint Staff. Following promotion to General, he served as the Vice Chief of Staff of the Army and then for three years as Commander in Chief of the United Nations Command, ROK/US Combined Forces Command, and United States Forces Korea.

In the course of his career, General RisCassi has held responsibility and gained a successful reputation for managing multi-billion dollar budgets, developing mid- and long-range strategies, working with industry to innovate and apply advanced technologies to both the battlefield and peacetime functions of the armed forces, and for leading and managing large organizations. He has been assigned around the world, worked with national leaders from many nations, and has a rare understanding of the changing international environment effecting our nation. Subsequent to military retirement, General RisCassi has been employed as an executive with Loral Corporation and Lockheed Martin Corporation.