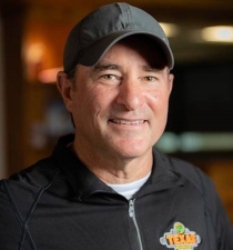 Jerry Morgan is President, CEO, and Partner to all Roadies at Texas Roadhouse. A 23-year veteran of Texas Roadhouse, he has 35 years of total foodservice experience, including with Bennigan’s and Burger King.

His career with Texas Roadhouse began in 1997 as Managing Partner in Grand Prairie, Texas, which was store #26 and the first in Texas. As a result of the team’s success, he was named Managing Partner of the Year in 2001, which is the company’s highest recognition.

Jerry was named President of Texas Roadhouse in 2020 and CEO in 2021 following the death of the company’s founder, Kent Taylor. He was also named to the Texas Roadhouse Board of Directors in June of 2021.