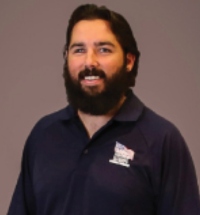 Born and raised in Georgia, Cameron West attended Army ROTC at North Georgia College and State University. After graduation, he Commissioned as a Second Lieutenant in the United States Marine Corps and became an Infantry officer. In 2010, Cam was on his first deployment serving with the Kilo Company, 3rd Battalion, 5th Marines, in Afghanistan, when he was severely injured during an improvised explosive device (IED) explosion. He lost his right leg, vision in his eye, and partial use of his right hand, and was medically retired as a captain.

Cameron joined HFOT’s family in 2014, and received his home in Georgia in 2015. He is an original member of HFOT’s Veteran Action and Advisory Team (VAAT) established in 2014, and became the VAAT president in 2020. He enjoys spending time with his wife and three young children. He is a stay-at-home dad during the week while his wife operates her own private practice. In his spare time he runs a cow/calf operation raising cattle for fellow commercial and Registered Angus Breeders.