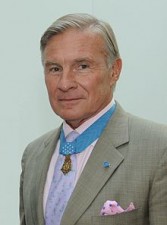 Paul W. “Buddy” Bucha is a Vietnam veteran and recipient of the Congressional Medal of Honor, the highest award that can be given to military personnel.

He received his BS in 1965, graduating academically in the top 2 percent of his West Point Class, number two in Military Order of Merit and a two-time All American and Captain of the Swim Team. Immediately upon graduation from West Point, he attended the Stanford University Graduate School of Business, receiving his MBA in 1967 and completing his Airborne and Ranger training between academic years.

After Stanford, he reported for duty with the 101st Airborne Division at Fort Campbell, Ky. to prepare for deployment to Vietnam as part of Operation Eagle Thrust. On March 16, 1968, Captain Bucha was the commanding officer of a reconnaissance-in-force mission that was inserted by helicopter near Phuoc Vinh, Binh Duong Province to locate and destroy an enemy stronghold. When his men were pinned down by heavy machine-gun fire, he crawled 40 meters through a hail of enemy fire to single-handedly destroy the bunker with grenades. Though wounded, upon seeing his unit’s perimeter was about to be overrun, he ordered a withdrawal while providing covering fire. At one point during the night, he ordered his men to “play dead” while he brought in friendly fire on the enemy. He also stood, in full view of the enemy, with a flashlight to direct the evacuation of three helicopters carrying the most seriously wounded from the field of battle. For his actions, Captain Bucha received, among other decorations, the Bronze Star with V and Oak Leaf Cluster, the Purple Heart and the Medal of Honor. Upon his return to the U.S., he reported for assignment as Assistant Professor of Managerial Economics at West Point.

After resigning his Army commission in 1972, Mr. Bucha had a successful international business career working for Electronic Data Systems Corporation (EDS), headquartered in Teheran, Iran. He then went to form his own international consulting company, Paul W. Bucha and Company, Inc. (PWBCO) and real estate development company Terra Mark II, LLC. From 1995 to 2000, Mr. Bucha was Chairman of the Board of Wheeling Pittsburgh Steel Corporation and Chairman of Ohio Coatings Company. Bucha serves on many corporate and advisory boards and is a Trustee of Connecticut Public Broadcasting Network.

Mr. Bucha is a frequent lecturer to military and private sector leaders on honor and leadership. He has been a member of the Board and an officer of The Fisher House Foundation and Intrepid Fallen Heroes Fund which support military families and wounded warriors. He is active in a variety of veteran organizations including the American Legion, the U.S. Army Ranger Association, the Veterans of Foreign Wars, the Disabled American Veterans, Hope for the Warriors, The Purple Heart Hall of Fame, Homes for Our Troops and the Congressional Medal of Honor Foundation. Mr. Bucha is a member of the 50th Anniversary Commission of the Vietnam War and is a member of the US Army Ranger Hall of Fame. He is a Gold Medallion Inductee of the International Swimming Hall of Fame and is a recipient of the Distinguished Graduate Award from the United States Military Academy. He is also a recipient of the Distinguished Military Service Award from the Stanford Graduate School of Business.

Mr. Bucha is married to the former Cynthia Bell of Cornwall on Hudson, New York. They have four children and seven grandchildren.