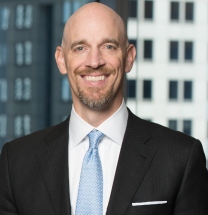 Prior to Citadel, Mr. Andresen was President and CEO of Island ECN (“Island”), the largest electronic stock market in the United States.  Under his leadership, Island grew from a start-up into the largest market for the trading of Nasdaq-listed stocks, ETF securities, and many NYSE-listed names.

Mr. Andresen has appeared as an expert before U.S. Congressional Committees more than 20 times, testifying on a wide array of trading-related topics, such as The Future of Electronic Markets, the Impact of Technology on Commodity Markets, and the Effect of September 11 on Financial Markets.

Mr. Andresen holds a B.A. in Economics and Political Science from Duke University in Durham, North Carolina.  A former world-class fencer, Mr. Andresen was a National Champion, a four-time All-American, and a candidate for the 1996 U.S. Olympic Team.  He was a 2013 Inductee into the Duke Athletics Hall of Fame.