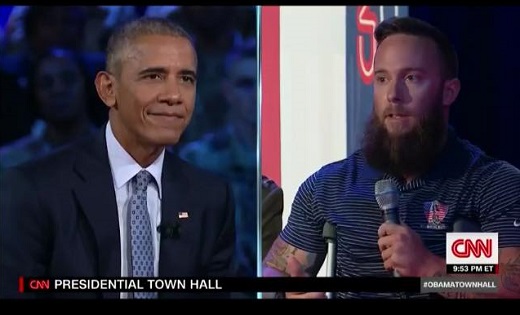 A few HFOT family members had their voices heard not only by millions across the country, but by the Commander in Chief himself on Wednesday night, Sept. 28.

Brandon Rumbaugh and Dwayne Cole and his wife Shontel were among the crowd of Veterans at CNN’s Town Hall meeting with President Barack Obama. The evening was hosted by HFOT Ambassador and CNN Anchor Jake Tapper.

Dwayne and Brandon, along with several other Servicemembers and spouses, had the chance to ask the President some hard hitting and emotional questions. To view clips from the meeting and story go here.

Teresa Verity is a marketing associate at Homes For Our Troops. Before joining the team in 2013, she was a reporter for several community publications in New England. She holds degrees in journalism and sociology from the University of Massachusetts Amherst. She can be reached at [email protected].

Click here to learn more about Homes For Our Troops and our important mission.