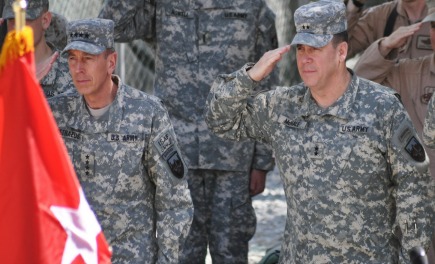 On the morning of Sept. 11, 2001, while serving on the Joint Staff at the Pentagon, the news of an airplane hitting the North Tower of the World Trade Center came over the television in our office. We quickly stood up from our desks and turned up the sound as we watched the smoke billowing out of the tower. In a matter of minutes a second plane that you could clearly see was a commercial airliner crashed into the South Tower. We knew in an instant after seeing the second plane hit the South Tower that this was an act of terrorism.

We also knew what we had to do, so we immediately emptied the office and moved to the Joint Staff Emergency Operations Center (EOC) in the basement of the Pentagon to man our positions. In the EOC there were flat screen monitors throughout the center. Most of the flat screens were tuned into all the major news networks, with many action officers and senior leaders watching intently as more terrorist attacks were about to unfold.

We had been in the EOC for about 30 minutes watching in disbelief the unfolding devastation of the tragic attacks on the World Trade Center when all of a sudden we heard a loud noise and the Pentagon floors and tables shuttered in vibration. It was 9:43 AM and the Pentagon had just been hit by American Airlines Flight 77. Immediately, deafening alarms and sirens were loudly blaring, and electronic voice loud speakers were directing all personnel to evacuate the building. We in the EOC had previous orders to stay in place and run continuity of operations in the Pentagon.

Almost immediately, television crews were live streaming on all news stations the Pentagon in flames. It was surreal as we watched the news reports, then all of a sudden reality set in when the rooms in the EOC started smelling like jet fuel and a hazy acrid smelling smoke started filling the air.

I thought to myself “What a terrible way to die.” We had no protective gas masks and we would be trapped in the EOC. I was proud to see no one panicked. We all worked through the emergency operations procedures improvising by putting articles of clothing over our mouths and noses to filter the stinging smell.

Shortly after the airplane crashed into the Pentagon and while I was down in the EOC, I saw Secretary Donald Rumsfeld walking through the smoke filled hallway. He was a man on a mission. The next thing I saw was Secretary Rumsfeld on television at the crash site manning a stretcher and helping the injured victims. Clearly he was focused on aiding the injured while assessing the situation.

While all this was going on, the news networks reported the crash of Flight 93 in Somerset, Penn. We would later learn the details of how several brave men and women gave their lives to fight the terrorists and disrupt the plan to crash the plane into the White House or the United States Capitol.

That said, I was filled with pride and humbled by personally witnessing in the Pentagon and watching on the news from New York, to Washington D.C. to the fields of Pennsylvania, the thousands of first responders, brave men and women in and out of uniform who risked their lives and lost their lives to save their fellow Americans.

To me 9/11 was up close and personal. That drives me to never forget what happened that day. We as a nation must never forget, and we must always continue to honor the thousands of men and women we lost as well as their families. Homes for Our Troops is a direct result of 9/11. It is truly a great Veterans organization made up of patriotic Americans that every day honors the men and women who served and sacrificed to protect our freedom, our liberties and our American way of life.

The team at Homes for Our Troops will never forget 9/11, and we will never quit until the mission is accomplished.

Teresa Verity is a marketing associate at Homes For Our Troops. Before joining the team in 2013, she was a reporter for several community publications in New England. She holds degrees in journalism and sociology from the University of Massachusetts Amherst. She can be reached at [email protected].

Learn more about Homes For Our Troops and our important mission.