In August 2006, SSG Arthur (Bunky) Woods was returning to his base in Iraq when his platoon stopped to investigate suspicious activity. As SSG Woods was directing his platoon, a sniper’s bullet entered the back of his neck, exiting through his jaw.

Moments later, SSG Woods’ men worked desperately to save his life. SSG Woods remained conscious throughout his medical evacuation, hearing his platoon members begging him to hold on. His next recollection is waking up at Walter Reed Medical Center with his family by his side, unaware that he had made the journey to Landstuhl, Germany, and ultimately stateside. SSG Woods was paralyzed from the shoulders down as a result of his injury.

Homes For Our Troops is proud to have donated a new specially adapted custom home to Bunky on Veterans Day, 2010. In the years since receiving his home, Bunky has focused on his academics. He graduated from Arizona State University with a degree in political science and history in 2015. He is now pursuing a master’s degree at Virginia Tech and plans to teach at the local community college when he graduates.

When asked what he would like to say to his supporters he replies, “It is people like you who make America great,” and then quotes Adlai Stevenson, “Patriotism is not short, frenzied outbursts of emotion, but the tranquil and steady dedication of a lifetime.“ 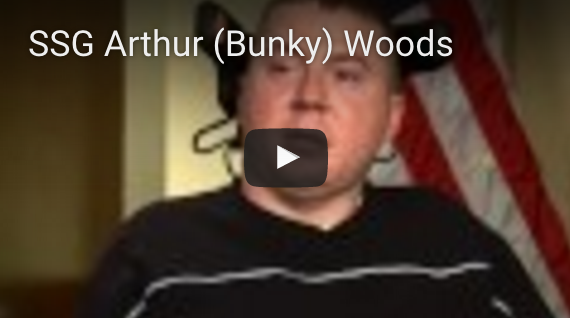