On March 29, 2011, while on foot patrol with the 2nd Combat Engineer Battalion, supporting 3/8 Marines, Corporal Joseph Woodke stepped on an improvised explosive device (IED) in Helmand Province, Afghanistan. The blast resulted in the loss of both legs and damage to his right ear.

During his year and a half long stay at Walter Reed Medical Center, Cpl Woodke underwent several surgeries for his legs and ear.

Now medically retired, Joseph has become an accomplished athlete. He has hand-cycled in seven marathons and plays sled hockey for the Nashville Sled Predators and earned a spot on the 2019-2020 U.S. National Sled Hockey Team. He would like to use these skills to eventually open his own gym. Joey has also continued his education, he obtained his business degree in December 2017. His specially adapted custom home, he says, will help him with these goals as it lifts the financial burden. He also enjoys the wide-open floor plan, which makes it easier for him to get around while in his wheelchair. Having an automatic door is beneficial when carrying items into the home, too.

Originally from Michigan, Joseph moved to Franklin, Tenn., for a warmer climate.

Joseph says it’s hard to put into words how grateful he is for the support not just for himself but for all injured Veterans. “Good people like HFOT’s donors and supporters are the reason why we were all willing to go to war. We wanted to defend them and this country,” he says. “Thank you for the help, and I hope you keep supporting this great charity.” 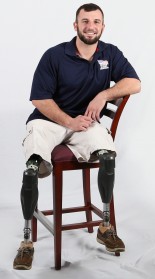