Like most young boys, Marcus Wilson’s father was like a superhero to him. Naturally he followed his legacy and became a Marine too. Unfortunately, his father never got to see him in uniform, as he passed away shortly before Marcus headed to boot camp.

In 2006, First Sergeant Wilson was on his second deployment as an Infantryman with the 2nd Battalion, 3rd Marines to Iraq. On Nov. 14, 2006, he and his unit had just finished a bridge assessment in Haditha, Iraq, when his vehicle ran over an improvised explosive device (IED). His fellow comrades worked quickly to free him from the wreckage, while taking small arms fire. As a result of the explosion 1stSgt Wilson lost his left leg and sustained injuries including six fractured vertebrae, several broken bones, punctured lungs, and burns to his face. He later found out he was the only survivor in his vehicle.

Marcus describes his rehabilitation process as long and painful. Yet even after enduring 42 surgeries within four years, Marcus still returned to service for an additional four years.

Now medically retired, Marcus has become quite the athlete. He plays sitting volleyball, wheelchair basketball, and recently hand cycled in the Army Ten-Miler. His favorite activity is spending time with his wife Briarly, an Air Force Veteran, and their ten children. In his previous home, Marcus could not spend as much quality time with his family as he would like, since the home was two levels and Marcus could not use his wheelchair due to the constricting layout. Since Marcus prefers to take off his prosthetic while at home, he often relied on crutches to get around or wore his prosthetic even if it was uncomfortable. This made caring for his youngest son difficult. Showering was also problematic for Marcus. He required assistance getting into the bathtub because of hazards and barriers. A single-level Homes For Our Troops home with an open floorplan and accessible bathrooms mitigates these challenges for Marcus. “Having an adapted home and getting my freedom back is another step in recovery,” he says.

The new home gives Marcus the foundation to achieve his future plans and goals. An avid gardener, Marcus is excited to have a yard of his own to “put down roots”. He has 26 potted fruit trees he plans to plant in the ground of his own yard. Marcus also says the new home gives him the time and financial stability to pursue his dream of opening up a nonprofit helping children with physical limitations.

Originally from Arkansas, Marcus and his family are choosing to build their HFOT home in Southern California where they currently live. They have many close friends nearby and find the area to be Veteran-friendly.

Marcus says he is grateful to HFOT’s donors and supporters for their generosity and kindness. “Thank you for the security and stability you have provided. Through your donations, you have given me back time. I will use this time to heal and to nurture relationships, to share my story and encourage those like me,” he says. 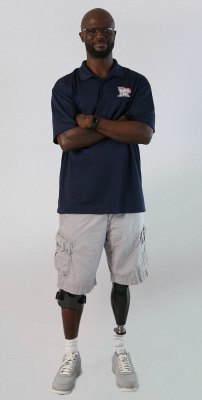