Army Specialist Ryan Wilcox first deployed to Iraq as a combat engineer with the 479th Engineer Battalion in 2007. During that deployment on March 13, 2008, he sustained a gunshot wound to his right leg while on a route clearance mission. Upon his recovery, he returned to active duty and deployed to Afghanistan in 2012 with the 444th Engineer Battalion. During this combat tour, SPC Wilcox endured chronic pain in his leg due to extensive nerve damage and residual scar tissue, resulting in his medical evacuation from Afghanistan on June 7, 2012.

SPC Wilcox was subsequently treated at Walter Reed Medical Center for over 18 months. After several surgeries and nerve grafts, he underwent the amputation of his right leg below the knee.

Now medically retired, Ryan enjoys spending time with his fiancée Sara and their two children, Nicholas and Juliana. Within his previous home, however, he faced barriers such as thresholds and stairs, which limited activities he could do with his family, including reading to his children at bedtime. Accessing his backyard was also challenging, often preventing him from accompanying them when they would go outside to play. Ryan’s specially adapted custom HFOT home alleviates those obstacles for Ryan and allows him to focus on his continued recovery. The freedom of navigating throughout a home that is barrier-free and situated on a level lot, Ryan says, relieves much of his daily stress and gives him more quality time and energy for his family, hobbies, and goals. “It’s not just walls and a roof – it’s allowing a Veteran to be with his family,” he says.

Ryan’s future plans include finishing his college degree and establishing a career working with other Veterans. Living in a donated home allows him to save money toward his children’s futures. He also looks forward to becoming more active in his son’s sporting events and getting back to hunting and camping again.

Originally from upstate New York, Ryan chose to build his home there to be close to family.

Ryan says he appreciates the support demonstrated nationwide by Homes For Our Troops’ supporters. “I am thankful there are people out there who care for our Veterans. HFOT supporters are transforming lives on a regular basis and I cannot say ‘Thank You’ enough to everyone involved,” Ryan says. 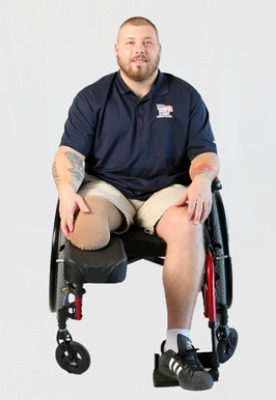