In 2003, Army Sergeant Patrick Wickens deployed to Iraq, assigned as a wheel vehicle mechanic with the 4-27 Field Artillery, 2nd Brigade, 1st Armored Division. On May 14, 2004, he was struck by a rocket-propelled grenade (RPG) during an ambush near Mahmudiyah, Iraq. He immediately lost his right leg above the knee and sustained shrapnel wounds and burns on his left leg. His medic and teammates are credited with applying tourniquets and rendering life-saving medical assistance, as both femoral arteries were severed in the blast.

After arriving in the United States a few days later, SGT Wickens endured weeks of surgeries and skin grafts at Walter Reed Medical Center. After repeated infections, doctors performed surgery to amputate his right leg at the hip.

Medically retired in January 2006, Patrick loves spending time with his wife Jenna and their two sons Gavin and Carter. He leads an active lifestyle by playing golf, kayaking, fishing, scuba diving, cycling, exercising, and traveling. In his spare time, Patrick volunteers with the nonprofit, The Mission Continues, building playgrounds and fixing bicycles in his community. He is also active with Fairways for Warriors, a nonprofit that provides golf equipment, instruction, and outings for injured Veterans and their families.

Although Patrick excels at activities on the green and in the water, he faced challenges within his previous home. His wheelchair did not fit in several rooms. This environment required Patrick to hop in and out of the shower and stand on his leg while doing laundry.

A specially adapted custom Homes For Our Troops home with an accessible bathroom and wide doorways mitigates Patrick’s challenges around the home. The home also gives Jenna independence, as she does not have to worry about his safety when he is home alone. “This home is the biggest blessing my family has ever received,” Patrick says.

A safe living situation gives Patrick more time to focus on his future plans, which include going back to school. Originally from Montana, Patrick chose to build his home in Orlando, Fla., for the warm weather and to be close to family.

Patrick says he cannot thank HFOT’s donors, volunteers and supporters enough for making his home a reality. “My entire family benefits from this amazing, once in a lifetime opportunity,” he says. “This HFOT home represents freedom from banks and a mortgage, so we can do some of the things we have wanted to do as family.” 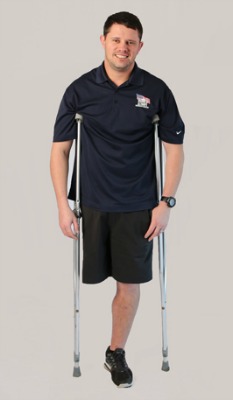