On May 31, 2012, Army Sergeant Joshua Wetzel lost both legs in an improvised explosive device (IED) blast in Mushan, Afghanistan. While leading his weapons squad in the 1-23rd IN, 2nd Infantry Division, SGT Wetzel’s metal detector failed to pick-up a non-metallic IED, and he subsequently stepped on it, throwing him seven feet into the air. The medic treating him – who was also his best friend – was shaken up, so SGT Wetzel tried using humor to lighten the mood. As he was loaded onto the helicopter, he asked the pilots if they could not strap his arm down so he could shoot his fist up in the air to let his fellow comrades know he was okay.

Joshua has not let his injuries prevent him from doing the things he loves and pursuing his goals. Since December 2012, Joshua has learned how to walk, run, swim, hand cycle, monoski, drive and most importantly be a father. He and his wife Paige became parents to a baby girl, Harper, in August 2013. However, the ability to live comfortably in his own home remained a burden in his previous home.

When he left Walter Reed, Joshua and Paige were tasked with finding a place suited to his needs. That was not easy to do in southern communities where many homes are almost 100 years old. The only place they could find was a two-bedroom ground level condo with a tub. Still, the home had its challenges. The floors were all carpeted, making it hard for Joshua to maneuver his wheelchair around, he did not have a shower sprayer so he could only take baths, and the counter tops and cabinets in the kitchen were too high.

In the specially adapted home they received from Homes For Our Troops in June 2016, Joshua and Paige are able to continue with their career and education goals. Joshua graduated Auburn University with a degree in marketing in May 2016. He is now working in media relations for the university’s athletic department. Paige is a women’s volleyball coach for Auburn.

The new home is also suitable for Joshua and Paige to expand their family. They welcomed their second daughter, Payton, into their lives in October 2016. “The peace of mind that comes with knowing that we can expand as a family without panicking, earning the confidence of my family to stay home alone, and grow old in a home without having to move once I get to a certain age, is truly irreplaceable,” Joshua says. 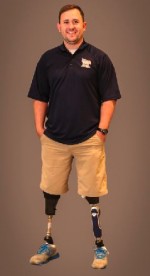