During his second combat tour in February 2012, Marine Sergeant Kaleb Weakley, a field artillery cannoneer, was on a routine patrol with the 2nd Battalion, 11th Marines, in southern Helmand Province, Afghanistan when he was hit by enemy fire in the left leg and right arm.

Once back in the United States, Kaleb underwent more than 20 surgeries on his leg and arm over the course of two years. It is possible he may need to amputate his left leg in the future. While recovering at Balboa Naval Medical Center, Kaleb met his wife, Sydney.

Now medically retired, Kaleb and Sydney have two children, Scarlet and Killian. Kaleb enjoys hunting, fishing, off-roading, shooting, and running. He is active within his community as a member of the American Legion, and does motivational speaking at local schools. He is also a firearms and archery instructor.

Although Kaleb leads an active lifestyle, he uses his wheelchair to get around his home. This makes many daily activities challenging as his wheelchair cannot fit in many rooms in his current home. Receiving a specially adapted custom Homes For Our Troops home with an open floorplan, and wide doorways and hallways, will alleviate these issues. Standing for long periods of time is difficult for Kaleb, so having an accessible kitchen with roll under sinks and lower countertops will make cooking easier.

The new home will provide Kaleb with the foundation to move forward with his future. His goal is to attend the Game Warden Academy in Bute, California, in October 2018 to become a conservation officer. He is currently finishing his associate’s degree in social and behavioral sciences at Cuyamaca College. He also likes to dedicate his time toward helping others through the nonprofit Outdoor Experience for All (OE4A), that takes terminally ill children hunting. “This home will give me the freedom to help my community,” he says.

Originally from Virginia, Kaleb is choosing to build his home in Southern California for the area’s agriculture and farming opportunities.

Kaleb has several friends who have received HFOT homes and he has seen how it has improved their lives. “I have seen the freedoms they enjoy and how it allows them to be active members of their community,” he says. “HFOT is a great organization that I fully support and hold near and dear to my heart. The organization is doing great things to help our nation’s wounded Servicemembers.” 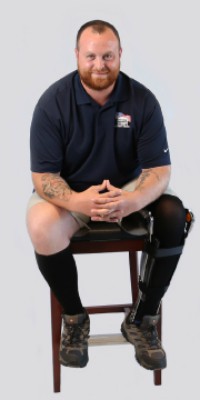