Matthew Watters joined the military wanting to give back to the country that gave so much to him. He enlisted after graduating from high school in 1997, and went on his first tour to Afghanistan in 2002. He deployed again to Iraq in 2003 with the 1st Platoon, B Company, 2nd Battalion, 75th Ranger Regiment.

On June 11, 2003, Sergeant Watters, a team leader, was on a raid on a terrorist training camp in Western Iraq when he was struck in the leg by a rocket propelled grenade (RPG). He immediately lost his left leg below the knee and sustained severe damage to his right leg and left arm.

Matthew was initially treated at a combat support hospital in Iraq before being transported to Landstuhl, Germany, where he was reunited with his wife Lindsey. After a week, Matthew returned stateside to Walter Reed Medical Center, where he endured numerous surgeries and physical therapy. The hardest part of his recovery, Matthew says, was when he returned to his home state of Washington and received his first prosthetic and began the “never ending process” of caring for his residual limb. Now 16 years later, Matthew still endures repeated surgeries and infections.

After medically retiring from the military, Matthew was determined to continue serving his country and community. He found a new calling as an officer with the Tacoma Police Department, and has been serving on the force for over 15 years. Matthew takes pride in his role and loves connecting with the community by presenting at schools, and providing gifts to underserved children during the holidays. However, after a long day on the job, Matthew returns home to another battle. He currently lives in a two story home, which forces him to use crutches to go up and downstairs, and he is unable to use his wheelchair because the hallways are too narrow. Living in a non-accessible environment for over 16 years has worn on Matthew physically and emotionally. Above all, Matthew fears his injury will worsen to the point he is no longer able to work, jeopardizing his family’s financial stability.

Receiving a specially adapted custom Homes For Our Troops home will enable Matthew to rest comfortably at home, improving his overall wellbeing. The financial stability of a donated home will ease the stress of providing for his family, and he will no longer have to pick up extra shifts, giving him more time for Lindsey and their two children. He will also have the energy to pursue his goal of teaching in law enforcement and explosive ordnance, sharing the knowledge he’s gained from his extensive experience in both fields.

Matthew and Lindsey, along with their three children, are choosing to build in Georgia, and are looking forward to finally having a barrier-free environment in the place they have always called home.

Matthew wants HFOT’s donors and supporters to know the freedom he will regain from his new home will enable him to give back to others. “This opportunity will be a huge blessing to my family, and one that I could use to better myself as well as my community. I believe in paying it forward and I would use my time to better my community through teaching, volunteering, and setting the example for others to follow.” 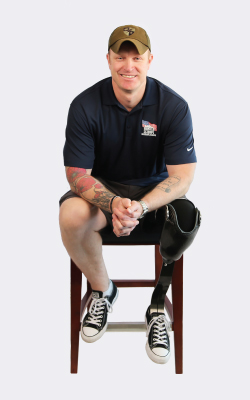