In 2010, Army Staff Sergeant Frank Wasson III was on his second deployment and serving as an Infantryman squad leader with the 2nd Battalion, 327th Infantry Regiment, 101st Airborne Division, in Kunar Province, Afghanistan. On Aug. 18, 2010, SSG Wasson’s platoon was ambushed during a night patrol. SSG Wasson’s vehicle was hit by two rocket-propelled grenades (RPGs), resulting in the loss of his left leg.

Frank’s previous living environment was not safe, accessible, or comfortable. He frequently tripped on the carpeted floors and would often slip in the shower on his prosthetic. His specially adapted custom Homes For Our Troops home with vinyl floors and a roll-in shower mitigates these hazards.

The financial freedom of receiving a donated home provides stability for Frank, his wife Brooke, and their two sons and daughter. “This home is a forever home for my family and me to enjoy, we don’t have to worry about when our next move will be,” he says.

Frank is now able to dedicate more time to coaching his sons’ baseball teams and going back to school. He recently coordinated and established multiple youth strength and conditioning camps for young athletes during their off-season. He is happy to have more time to play for the USA Patriots, America’s amputee softball team. For the 2017 season, Frank developed, implemented and led the team’s Annual Amputee Kids Camp Training Plan of 15 teams members and 30 youth athletes in Washington, D.C. Frank has sat on the board of the historical Military Order of the Purple Heart Organization, Chapter 305 of Salem, Oregon. His other hobbies include hunting, fishing, and photography.

Since being injured, Frank enjoys pushing the limits and has completed the grueling 26.2 mile Bataan Memorial Death March in White Sands, New Mexico, the 26 mile Grand Canyon Rim to Rim and has completed in multiple CrossFit competitions. He is currently working for M&W Electric.

Originally from Salem, Oregon, Frank chose to build his home there to be close to family.

Frank says receiving the home is “a blessing beyond measure” and is grateful to HFOT’s donors and supporters who are making it possible. “I cannot thank you enough for giving my family and me the gift of a fresh start and making my life much easier. It will be a huge relief to me mentally and financially,” he says. 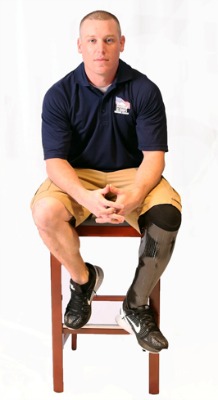