Marine Sergeant Bradley Walker was on his second deployment when he lost both of his legs in an improvised explosive device (IED) blast in Haqlaniyah, Iraq on Nov. 27, 2006.

A member of the 4th Combat Engineer Battalion, Sgt Walker was the driver of a security vehicle returning from a mission in the Haditha Triangle when his vehicle triggered an IED along the Euphrates River. Sgt Walker lost both legs in the blast. Knocked unconscious, Sgt Walker received lifesaving aid from his squad; stabilizing him and preparing him for a medical evacuation by helicopter.

Transported to a local field hospital, Sgt Walker was next airlifted to Landstuhl, Germany before arriving at Bethesda Naval Medical Center for one month before being transferred to Walter Reed Army Medical Center, where he remained for almost three years enduring surgeries and rehabilitation before medically retiring. Sgt Walker would like to return to college and would like to eventually work in a field that gives back to the community.

A member of the Adjutant of Military Order of the Purple Heart Chapter #356, The American Legion post #201 in White Pine, and the Big Brothers of America, Brad is already making a difference locally. He enjoys hand-cycling and sitting volleyball, and restoring classic arcade games.

Since receiving his specially adapted home, Brad and his wife Anna have become parents to their son, Lincoln.

Sgt Walker is grateful for the chance to be given the opportunity to live in a specially adapted home provided by Homes For Our troops. “It is nice to have the freedom back and access to all sections of my house from my wheelchair. God bless you for everything that you do and have done. It fills me with national pride to see the things that are being done for our nation’s Servicemembers. Thank you.” 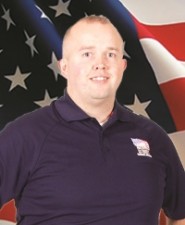