Army Sergeant Robert “Finn” Visbal joined the military right after high school as a tanker to follow in the footsteps of his grandfather, who was also a tanker in the Army. He deployed once to Iraq in 2008, and then to Afghanistan in 2011, as a gunner with A Company, 1-5 Infantry, 1st Stryker Brigade Combat Team, 25th Infantry Division. On Dec. 4, 2011, his unit was on a mission clearing abandoned compounds and building roads, when his vehicle drove over an improvised explosive device (IED). SGT Visbal sustained significant damage to his left leg and right foot in the blast.

After numerous surgeries and months of physical therapy, SGT Visbal’s left leg was amputated below the knee.

Now medically retired, Finn earned a degree in automotive technology at Chattahoochee Community College in July 2018 and he is now in a one-year welding program. Finn and his wife Holley got married in August 2016 and they became parents to a baby boy in January 2017.

Receiving a specially adapted custom home from Homes For Our Troops, gives Finn space, comfort, and freedom to focus on his recovery and rebuilding his life. Living in a single-level home also means Finn does not have to haul a heavy backpack while climbing stairs. Being able to use his wheelchair more around the home, makes parenting easier for Finn. He is also happy to now have a garage in his home where he has the space to work on cars, a favorite hobby.

Originally from Georgia, Finn chose to build his home in Cartersville to be close to family.

Finn is grateful to HFOT’s donors and supporters for making it possible for him to receive a specially adapted home. “The greatest benefit I have received from this home is that I can be a better husband and father. Since I don’t have to worry about the stairs anymore it’s easier for me to help around the house. I can access my son’s room now, and can play with him and all of his toys. Thank you for helping me find more freedom and independence,” he says. 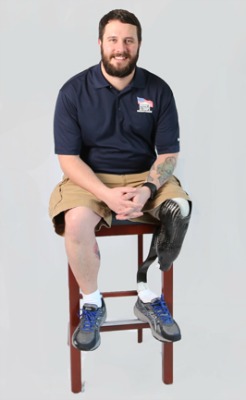