Anthony was in the Marine Corps for two and a half years as an Infantryman, but was injured, and discharged before 9/11. He met his wife Shauna at the job he had after leaving the Marine Corps. Shortly after they married, he joined the Army as a communications specialist. He was assigned to 2nd Brigade, 101st Airborne Division, and deployed with them to Afghanistan in 2010.

On Sept. 22, 2010, Staff Sergeant Verra lost both of his legs after stepping on an improvised explosive device (IED) in Arghandab, Afghanistan. Called in to take pictures documenting the situation at a compound that had just been cleared of five IEDs, SSG Verra stepped on an unidentified explosive. The blast traumatically amputated his legs and hurled him through the air.

Airlifted to Kandahar, and then to Bagram, SSG Verra would travel through Landstuhl, Germany, before arriving at Walter Reed Army Medical Center in Washington, D.C.

Now medically retired, Anthony enjoys spending time with Shauna and his four children. He and his family are very active in their church and community. A football fan, Anthony enjoys attending games as well as watching them on television. He would like to continue to work with Veterans and hopes to earn a degree in business and work with the Army or an organization with a close military affiliation.

By living in his specially adapted custom home, Anthony has regained his freedom and independence. He and Shauna have also been able to expand their family. “Homes For Our Troops is a great program with sponsors and volunteers who offer their support and help give back the basic daily needs to people who are in situations similar to mine. A specially adapted home from Homes For Our Troops helps me be more independent and allows me to be an active member of my family. Thank you for giving me the opportunity to live my life in a home without barriers.” 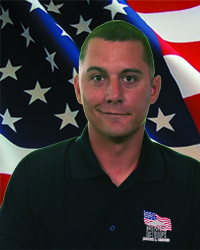