On Aug. 26, 2013, Army Sergeant Juan Carlos Vasquez, a combat engineer, was on his third combat tour. He was on a route clearance mission in Hasan Karez, Afghanistan, with Charlie Company, 2nd Brigade Combat Team, 1st Cavalry Division, when the vehicle he was riding in drove over an improvised explosive device (IED). The blast resulted in the loss of his right leg.

Through hard work and determination, with assistance from his therapists at the Center for the Intrepid in San Antonio, Carlos was walking on his prosthetic leg by the following Christmas. Although he has made great progress in his recovery and can now drive and walk with few issues, it is at the end of the day when Carlos’ injuries pose the most challenges.

Opting for the comfort of his wheelchair instead of wearing his prosthetic at home, Carlos faced obstacles in his previous living space. His home was not adapted, which made everyday activities like cooking and showering nearly impossible. With a new home from Homes For Our Troops, Carlos has wider doorways, lowered counters in the kitchen and an accessible bathroom, making these tasks and daily routines much easier. Living mortgage-free also enables him to live worry free with his wife Lisa and their two children.

Juan has aspirations of becoming a school counselor. He already provides support to other injured Veterans at weekly group therapy sessions. An avid sports fan, he would also like to coach high school football. In 2018, Carlos graduated from Texas A&M University with a degree in education.

Originally from Houston, Texas, Carlos chose to remain in the Lone Star State to be close to family and his prosthetics lab.

Carlos and his family are grateful to all HFOT supporters. “You gave us back a little piece of our freedom that we have already fought for. Words can never express my gratitude for this organization, all its supporters and everything it stands for,” he says. 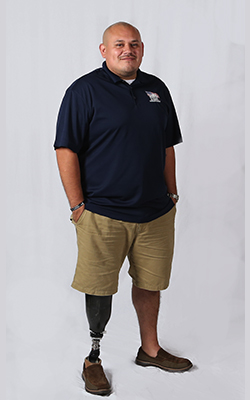