Cristian Valle came into the Army as an Infantryman right out of high school. After his first tour to Iraq as a part of the invasion force with the 3rd Infantry Division, he left active duty but stayed in the Army Reserve. He deployed to Iraq the second time with the 100th Battalion, 442nd Regimental Combat Team in 2005.

On Oct. 23, 2005, Army SGT Cristian Valle was performing a vehicle checkpoint in Balad, Iraq when a mortar round with a grenade attached was thrown out the window of a passing vehicle. The grenade exploded a few feet away from SGT Valle, tossing him into the air. He lost one of his legs immediately and the other was so severely damaged it was eventually amputated. He also sustained a pelvic fracture, burns and significant blood loss.

After SGT Valle was tossed into the air and landed on the ground, through the dust and smoke, the first thing that caught his eye was his wedding ring and he says that is what pulled him through. He spent 13 months at Walter Reed, where he had multiple leg cleaning surgeries and months of physical therapy. Today he is continuously adjusting to his condition.

The home Cristian previously shared with his wife Blanca and their four children was not equipped for his needs. The home was not ground level, the doorways were too small and Cristian was unable to do routine tasks around the home in his wheelchair due to lack of space.

Cristian says his specially adapted custom HFOT home is a “reset button” for his family and him. The wide doorways, broad hallways and accessible kitchen and bathrooms lift a weight off his shoulders. Cristian was a dispatcher at his local fire department for nine and a half years. Now that he is settling in his new home, Cristian has aspirations to continue his education and he is pursuing his dream of becoming an actor. Blanca would also like to go back to school for photography. In their previous home, she says she often worried about her husband’s safety when leaving him home alone.The family’s new HFOT home, she says, relieves that stress.

Cristian would like to provide support to others in similar situations. He has already begun to pay it forward by hand cycling for Team HFOT.

Cristian says he has much appreciation for the generosity shown from Homes For Our Troops supporters. “The injury proved to be very challenging and debilitating for me and my family as it resulted in the double amputation of both legs. Having the opportunity to participate in such a great program means a lot not only to me but to my entire family,” he says. 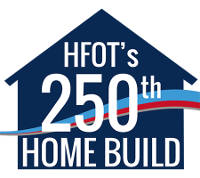