Growing up in a military family, Luis Rosa-Valentin moved from base to base as his dad’s orders changed, and he has been interested in anything military related since he was a young boy.

In April 2008, two days before his 25th birthday, Army Sergeant Rosa-Valentin was part of the 4th Infantry Division, acting as a point man on a dismounted combat raid just outside of Baghdad, Iraq. During a six-hour firefight in an area filled with snipers and combatants, Luis assisted an injured buddy, helping to evacuate him out of the area, all the while being shot at by snipers.

After leaving the helicopter landing zone and returning to the firefight, SGT Rosa-Valentin was scanning the rooftops for snipers when an improvised explosive device (IED) exploded directly next to him, immediately amputating his legs and left arm and leaving him unconscious. Regaining consciousness, it took immediate life-saving measures to stabilize him enough to be transported to a local hospital. He was later airlifted to Landstuhl, Germany, and finally to Walter Reed Army Medical Center where he remained for nearly a year and a half.

Now medically retired, Luis enjoys spending time with his wife and five children.  In his previous home, Luis faced many challenges with adjusting to his new normal, especially since his home was not accessible. A specially adapted custom Homes For Our Troops home enabled Luis to comfortably recover. The home also provides independence and gives him a stable environment to safely raise his children.

A fan of UFC (Ultimate Fighting Championship), SGT Rosa-Valentin enjoys watching the fights both in person and on television. His other interests include sky diving, and he looks forward to obtaining his sky diving certification in the future. Luis is currently in school as a General Fine Arts major at Maryland Institute College of Art, with the plan to earn a master’s degree in art therapy.

Luis would like to thank HFOT’s donors and supporters for making his specially adapted custom home possible.  “Freedom is not free… don’t forget the fallen Soldiers and please, don’t forget the Soldiers who return from war. Thank you Homes For Our Troops for this gift… this home has given me back my freedom.” 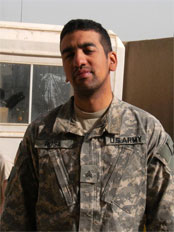