Army Sergeant John Vail, a military police officer, deployed with the 113th Military Police Company of the Mississippi Army National Guard in October 2011. On March 7, 2012, while on a routine patrol in Kuwait, the vehicle he was riding in rolled over, ejecting him and then landing on top of him. The incident resulted in a spinal cord injury and paralysis from the waist down.

Following the accident, SGT Vail was flown to Landstuhl, Germany and then transported back to Brooke Army Medical Center in San Antonio, where he spent almost two months. Eventually, he was transferred to the James Haley Veterans Hospital in Tampa for treatment of his spinal cord injuries and rehabilitative therapies for seven months.

John’s mother and father have been by his side throughout his recovery, encouraging him during every phase of progress. Another motivating factor contributing to John’s success is his son Brendon Michael; John dreams of running and playing football with him in the future.

After John was discharged from the hospital, the challenges of his injuries became more prominent since he was no longer in a facility that accommodated his wheelchair. John’s previous living spaces also had carpet, which made wheeling a chair difficult.

The mortgage-free home John received from Homes For Our Troops enables him to start rebuilding his life and allows him to continue his work of serving others. John has become a motivational speaker and started a business venture called Endless Ability Jeans, a brand of jeans adapted to those who use wheelchairs.

The new home allows him to spend more time with his son and get back to his hobbies, which include attending car and truck events with his show truck, and learning all he can about motorcycles. He is grateful for this life-changing from those who supported his Homes For Our Troops build project. 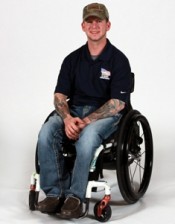