After graduating from the University of Southern California with a business degree, Ryan Timoney enlisted in the Army to serve his country, subsequently being commissioned as a field artillery office from Office Candidate School. In early 2012, then First Lieutenant Timoney, deployed with the 214th Fires Brigade, Field Artillery unit, as part of Security Force Assistance Team (SFAT) 28. The unit’s mission was to train and assist the Afghan police unit in Tarin Kowt, Afghanistan. On May 20, 2012, SFAT 28 was attacked by a suicide bomber. The shrapnel from the explosion hit 1LT Timoney, resulting in a craniotomy (removal of a part of the skull to reduce swelling), the loss of his left leg, partial vision loss and balance impairments.

When he arrived back in the United States, Ryan began speech and vision therapy, and training to restore his memory and walking ability at Walter Reed and the VA Hospital in Tampa. In November 2012, he underwent a cranioplasty to replace the missing portion of his skull with a custom crafted piece of metal.

Ryan’s condition had greatly improved by the spring 2013, when he married his wife, Kelby, on the beach, and he was even able to stand with his new bride for wedding photos.

Despite his impressive recovery, Ryan still experiences obstacles in traditional housing. He uses his prosthetic leg during the day, but when at home he prefers his wheelchair. The doorways in his current home are narrow and most rooms are barely wide enough for him to access. A new specially adapted home from Homes For Our Troops will remove those barriers. Additionally, its accessible bathroom with a bench and grab bars will be beneficial for Ryan as he now has to balance on one leg while he showers.

Ryan looks forward to the financial freedom and stability of a forever home in Texas, which will allow Kelby and him to move forward to the next phase of their journey, and focus on giving back and helping others. Ryan recently spent seven months working on a website for an association of churches in his area. He is also in a course offered by Veterans4Quality, which trains Veterans how to enter the Software Quality Assurance industry and connects them with companies. In his free time, he enjoys reading, spending time with friends and shooting. He also enjoys playing the piano, an activity he started as part of his music therapy after his injury.

Ryan and Kelby say they are sincerely grateful for those who will contribute to their HFOT project. “These homes are tremendous blessings, providing an opportunity to grow. Thank you so much for your support,” Ryan says. 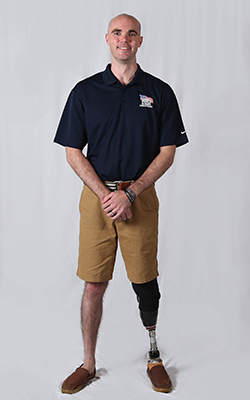