Motivated by the 9/11 attacks, Aaron Tieffel enlisted in the Army as an Infantryman.

On August 23, 2007, on his first combat deployment, PFC Aaron Tieffel was on a mission to look for possible improvised explosive devices (IED) in Riyahd, Iraq with the 2nd Battalion, 27th Infantry, 3rd Brigade Combat Team, 25th Infantry Division, when his vehicle was struck by an IED (improvised explosive device), flipping the vehicle over causing him to fall out. The blast resulted in a right below-knee amputation, left leg limb salvage, a spinal cord injury, Open Book Pelvic fracture, and other internal injuries. Once back in the United States, Aaron had multiple surgeries and a long recovery.

Now medically retired, Aaron enjoys spending time with his wife, Myca, and their son, Joshua. Aaron is a member of the Warrior Brotherhood Motorcycle Club, an organization that gives to Veterans in need. Aaron feels that he had many hobbies in the past, but since his injury, he has not had time for them. In his current home, he is not able to use a wheelchair so he has to use crutches to access the home.

Receiving a specially adapted custom home from Homes For Our Troops will mitigate the daily obstacles for Aaron making life easier for him and his family. He looks forward to expanding their family and having a safe space to host friends and family. He would also like to go back to school.

Originally from Illinois, Aaron is choosing to remain in the state to stay close to family.

Aaron would like to thank HFOT donors and supporters for their commitment to Veterans like himself. “This gift will give me freedom. Thank you for being the most caring and compassionate people.” 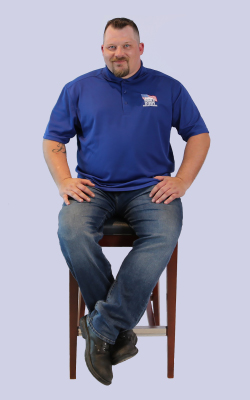