On Oct. 26, 2010, while on foot patrol in Afghanistan investigating a suspicious dirt mound near a secured building with the 3/5 Marines, Marine Corporal Robert Thrailkill Jr., a comabt engineer, sustained the traumatic amputations of both legs above the knee and extensive damage to his right hand when he stepped on a pressure-plated improvised explosive device (IED). He was 19 at the time of his injury and just one month into his first deployment.

Thrown on his back, Cpl Thrailkill recalls hearing static and a ringing in his ears, and seeing complete blackness. He became aware of the severity of his situation seconds later when he realized he could not move his legs. Cpl Thrailkill was then airlifted to a local hospital and stabilized.

Bobby played on the US National development sled hockey team in 2015, which grooms players for the US Paralympic Team. Bobby enjoys going to the movies, learning new things, and spending as much time possible with his three-year-old son Zekiah. His future plans include attending college and working outside the home. 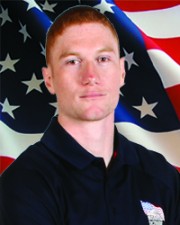