While returning from a combat mission, the Apache Helicopter that Chief Warrant Officer (CW4) TaMarsh Thompson was piloting began to malfunction. Prior to crashing, the rear rotor blade spun off of the aircraft, striking Thompson’s head and causing severe traumatic brain injury among other permanent debilitating health issues. The crash occurred on CW4 Thompson’s fourth deployment to Afghanistan, ending his 18-year career of distinguished service with the U.S. Army.

Thompson was medically evacuated from the site to Landstuhl, Germany, and eventually to Walter Reed Medical Center in Bethesda, Md. Several months into his recovery, he was transferred to the Tampa Polytrauma Rehabilitation Center in Florida.

Since the time TaMarsh returned stateside, his loving family, particularly his mother Janice Summerling and his sister Kareen Pointdexter, an active duty Army Soldier, have been by his side, motivating and encouraging him during his recovery. TaMarsh’s healing journey has been met with several setbacks, including blood clots that have rendered him to a feeding tube, and over time impaired his cognitive functions, and most sadly, his ability to communicate with family.  He is currently waiting to undergo a series of cranial surgeries to relieve pressure in his brain. TaMarsh remains fully wheelchair dependent at this time.

Both Janice and Kareen are grateful TaMarsh is now in a caring and nurturing environment surrounded by those he loves, especially his two sons and daughter, in his HFOT home. The family is certain now that TaMarsh is equipped with his own specially adapted home, one suited to his non-ambulatory needs, he will make better strides in his recovery than if he were to remain in a nursing care facility. When talking about what the gift of this new home from Homes For Our Troops means to TaMarsh and his family, Janice says she is reminded of the lyrics to a Bob Marley song: “Don’t worry about a thing…’cause every little thing gonna be alright.” 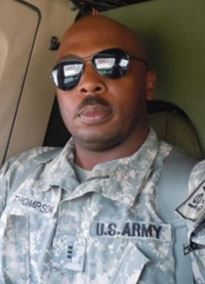