Marine Lance Corporal Nicholas Thom was severely injured when an improvised explosive device (IED) exploded at his feet in the Musa Qala District of Afghanistan on April 4, 2010.

While on a four-day counter-insurgency mission near the Green Zone, a suspicious item was identified near his position. Upon investigating, LCpl Thom noticed wires hanging out of a can, which then detonated remotely, severely injuring LCpl Thom. An enemy ambush erupted as the Marines raced to his position.

Carried out of the line of fire, Doctors on scene fought to save his life and close his wounds as he was prepared for a helicopter evacuation which was delayed due to the battle that was raging. LCpl Thom blacked out during the 30-minute wait for the MEDEVAC and was transported to Bagram Air Force Base where he was stabilized for three days before being airlifted to Landstuhl, Germany.

Nick and his wife Samantha are grateful to be living in a specially adapted Homes For Our Troops home that gives Nick the freedom and independence back he fought so hard to preserve. Nick enjoys football and hand-cycling and is part of the Marine Corps Mentorship Program for injured Veterans. Since he received his HFOT home, Nick has become an avid golfer and competed on the U.S. team in the 2019 Simpson Cup, an annual tournament between teams of injured Veterans from the U.S. and Great Britain. In 2018, Nick and Samantha became proud parents to their son Waylon. 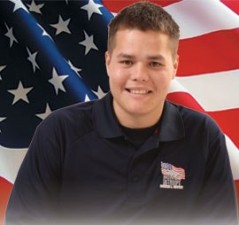