On June 10, 2010, Army SGT Timothy Hall was six months into his 1st deployment when he lost both of his legs as the result of a mortar attack while at his Forward Operating Base in the Logar Province of Afghanistan. He was stationed at FOB Shank when a mortar attack threw him into the air, critically injuring the 20-year-old from Hawthorne, Nevada.

A Communications Signal Support Systems Specialist, SGT Hall’s legs required amputation the following day due to the severity of his injuries; his right leg amputated at the hip and his left leg amputated at the thigh. Initially treated at Bagram Air Base, Tim was airlifted to Landstuhl, Germany, where he spent nearly a week being stabilized for transfer to Walter Reed Army Medical Center in Washington, D.C.

SGT Hall has endured more than 60 surgeries to date during his stay at Walter Reed National Military Medical Center in Bethesda, Maryland.

SGT Hall enjoys basketball, swimming, wakeboarding, and snowboarding, but especially likes auto racing. He hopes to have a career in racing in the future. Tim’s family has been by his side through every bit of his recovery and the bond with family is very important to Tim. He looks forward to the day when he is raising a family of his own.

SGT Hall would like to thank all of the donors and volunteers who made his specially adapted home from Homes For Our Troops a reality. He says, “I cannot say thank you enough for everything that has been done for me. Thank you for caring enough to make a difference.” 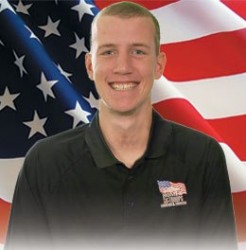