Ryan Sykes joined the military at 18, wanting to give back to his country and explore the world. He spent more than half of his military service on either training missions within the U.S. or deployments overseas.

On March 3, 2008, Navy Petty Officer First Class Ryan Sykes was on his fifth deployment to Afghanistan, serving as a special warfare analyst, when he sustained a traumatic brain injury (TBI) and other life-threatening injuries in Eastern Afghanistan. Lying unconscious in the darkness for more than five hours, a local security guard found him and alerted American troops. In addition to the traumatic brain injury, he also sustained a collapsed lung, facial fractures, soft tissue damage on his bicep, and pneumonia. Petty Officer Sykes was saved from further brain injury due to the freezing temperatures that limited the swelling of his brain.

Now medically retired, Ryan maintains an active lifestyle, and makes working out at the gym a priority despite his injuries, which include partial-paralysis on the left side of his body. He likes being outdoors, usually accompanied by his service dog Docker, and enjoys camping, biking, kayaking and swimming. Ryan now rides an upright trike and has placed first for the past several years in the USA Cycling Para-Cycling National Championships.

Though Ryan leads a busy lifestyle, he could not do as much as he would have liked because his previous home was not wheelchair accessible. His living situation made it difficult to perform daily routine tasks. With a specially adapted home from Homes For Our Troops, he is able to easily prepare meals in a kitchen with roll-under countertops and pull-down shelves. Additionally, he is able to shower safely in an accessible bathroom. He is relieved to have accessible appliances, a functional kitchen, and complete wheelchair mobility, all of which he says enable him to put his full strength and energy into trying to walk again, and further advance his cycling training for the US Paralympics.

With his newfound financial freedom of living mortgage-free, Ryan is able to give back to his community through his Rotary Club, and provide a better quality of life for his son.

Ryan would like to thank those who supported the building of his Homes For Our Troops home. “Thank you for this chance to start a new chapter in my life. This is an opportunity that I never dreamed of and one I shall never take for granted,” he says. 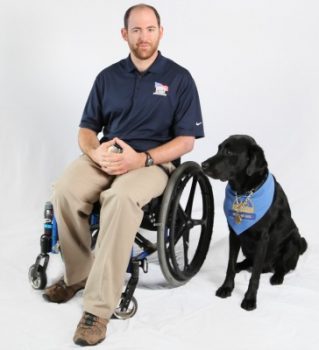