Wayne Swier knew he wanted to be a Soldier growing up. After high school, he worked for a couple of years, and then enlisted in 2006 as a fire support specialist. He deployed twice to Afghanistan with the 506th Parachute Infantry Regiment. On his second tour with C Troop, 1-61 CAV, 506th PIR, 101st Airborne Division, he was conducting a foot patrol in Memlah, Afghanistan, when he stepped on an improvised explosive device (IED) on Nov. 3, 2010. The blast resulted in the loss of his left leg and hearing loss. He also lost most of the use in his left arm.

After two years of physical therapy and multiple surgeries at Walter Reed, Wayne was medically retired in January 2013.

Wayne is now back in his hometown of Rapid City, South Dakota, studying business and marketing, with plans to become a special education teacher. He married his wife, Bridget, in August 2017. In his free time, he plays guitar and rides with his motorcycle group, Combat Vets Motorcycle Association (CVMA). He recently took command of his local VFW post. He hopes to one day start a business designing and customizing adapted motorcycles for others with physical challenges.

Wayne benefits from the comfort and safety that comes with living in a specially adapted custom Homes For Our Troops home. He says that his home allows him to “truly live” again, and he does not have to worry about further injury. The living room in his previous home was not big enough for his wheelchair and he often fell in the shower. During the winter, the front steps would ice over, which made it difficult for Wayne to maneuver with his prosthetic. A home from Homes For Our Troops alleviates all of these hazards – inside and out. “This is the first time since leaving the military in 2012 that I am actually able to utilize my wheelchair within my home,” he says.

Wayne chose to remain in Rapid City because of its proximity to family and his VA hospital.

Wayne is grateful for the unwavering and abundant support from HFOT and its network of donors and volunteers. “The Veteran community has so much on its plate with so many unfortunate issues, HFOT has stepped up to provide necessary accommodations for those of us that society has seemed to forgotten,” he says. “As a Veteran and Servicemember, I personally would like to make an attempt at showing my gratitude and thank you from the depths of my heart for doing what you all do.” 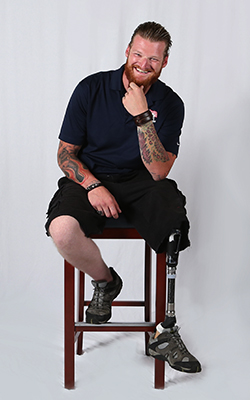