Marine Sergeant Josh Sweeney was on his second deployment when he lost both of his legs and sustained severe arm injuries after a bomb exploded beneath him in NowZad, Afghanistan on Oct. 28, 2009. Lifesaving measures were administered to Sgt Sweeney as he waited for two hours for his medical transport to carry him from the blast site, his left leg traumatically amputated and his right leg shredded from the explosion.

Sgt Sweeney had no idea that his delayed evacuation was due to the fact that the two MEDEVAC vehicles sent to rescue him had both hit IEDs en-route. Once loaded on his transport vehicle, with mortar rounds landing nearby, he was placed in a medically induced coma and did not learn until later that this convoy of vehicles experienced another IED blast on the way to the flight line where he was airlifted to Camp Leatherneck. Airlifted next to Landstuhl, Germany, Sgt Sweeney was later transferred to Bethesda National Naval Medical Center in Maryland in November 2009 and finally to Brooke Army Medical Center in San Antonio. He continued his treatment in San Antonio, enduring dozens of surgeries as he recovered.

During that time, Josh was introduced to the local sled hockey team, The Rampage, and started practicing with them. He now plays sled hockey on the U.S. National Sled Hockey Team, which played against Russia in the 2014 Paralympics in Sochi. Josh scored the game-winning goal in the gold-medal final. The team also won the World Championships in 2015. Josh placed first at the 2019 Sarasota-Bradenton CAMTRI Paratriathlon American Championships and 2019 USA Paratriathlon National Championships. He has been selected as one of 17 members of the 2020 US Military Sports Elite Athlete Program, a nonprofit that expands opportunities for athletes and para-athletes who are competitive at a world or national level.

Josh and his wife Amber were presented with their new specially adapted home in November 2014. He is grateful to HFOT and all supporters who helped make his home possible. “Receiving a gift of this magnitude is something I could never have asked for or even imagined,” he says. “Knowing that my family will always have a place to lay their heads and a place to call home is incredible.”

Josh enjoys working out at the gym and playing recreational wheelchair basketball. He is currently training to race in the 2019 Chicago Marathon. Josh and Amber are happy to be raising their son and daughter in Oregon. Josh has started a local sled hockey program in Portland and has plans to enroll in college and pursue a degree in engineering. Amber is working as a call center nurse. Josh is happy the accessibility of the home allows him to care for his children easily while Amber is working. 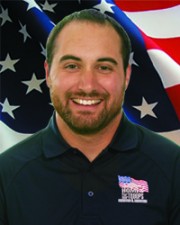