Joshua Sust knew he needed to make a big life change when he found himself getting into the wrong crowd in high school. Motivated to help by the 9/11 attacks, Josh enlisted in the United States Marine Corps as an Infantryman in hopes to better his future and make a difference.

On November 12, 2011, during his deployment to Musa Quala, Afghanistan with Echo Company, 2nd Battalion, 4th Marines, Cpl Sust was on patrol when his vehicle drove over a pressure plate improvised explosive device (IED). The blast ejected Josh out of the vehicle, resulting in severe damage to his left leg, left arm, traumatic brain injury (TBI), and hearing loss. For over three years, doctors attempted limb salvage on his left leg. During that time, Josh endured constant pain and a decreased quality of life. In August 2015, he made the life-changing decision to amputate below the left knee.

Now medically retired, Josh enjoys spending his days hunting and fishing. His time outdoors is a form of therapy and builds camaraderie with his friends. A huge Bengals football fan, he likes attending games whenever he can. He also motivates others with similar injuries as a member of the Amputee Coalition peer support effort.

Josh says that receiving an HFOT home will be a game changer.  He is friends with several HFOT Veterans and has been inspired by their journey. He has witnessed the difference a specially adapted custom Homes For Our Troops home has made in their lives. In his current home, Josh often gets discouraged because he cannot use a wheelchair and is forced to use a crutch for everything, including going downstairs to do laundry. With the freedom and independence the home will provide him, he will have more time and energy to host Amputee Coalition Peer Support groups in his home. Originally from Cincinnati, Josh is choosing to remain in Ohio to be close to family and friends.

Joshua feels grateful to receive a specially adapted custom home. “First and foremost thank you all for this amazing life-changing gift. Without your donations, none of this would be possible. I will not take this for granted and will pay it forward every way I can. You gave me freedom and independence. It is men and women like you that make this country so great.” 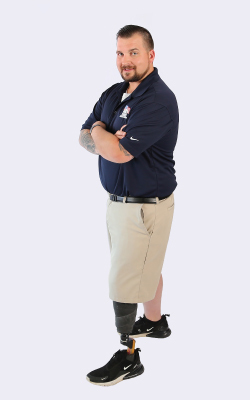