Marine Sergeant Zachary Stinson was on his first deployment when he lost both of his legs above the knee and sustained severe damage to his hands in an improvised explosive device (IED) blast in Marjah, Afghanistan on Nov. 9, 2010.

While on a foot patrol with the 2nd Battalion, 9th Marines, Sgt Stinson stepped on an IED resulting in the traumatic amputations of his right leg below the knee and his left leg above the knee. Lifesaving measures by the corpsman readied him for MEDEVAC while shots were fired and a gun battle ensued.

Sgt Stinson remembers asking the corpsman to tell his wife, Tesa, (pregnant with their first child) that he loved her. Medically evacuated by helicopter, Sgt Stinson was first treated at Camp Bastion and next, the Craig Joint Theater Hospital in Bagram while in Afghanistan before being transported to Landstuhl, Germany.

Arriving at Bethesda Naval Medical Center six days after the blast, Zach remained there for three months. Transferred to Richmond Va., for 30 days, Sgt Stinson was next sent to Walter Reed Army Medical Center in Washington, D.C. where he spent more than a year before finally transferring to the newly renamed Walter Reed National Military Medical Center in Bethesda, Maryland. Zach has endured more than 25 surgeries, including the eventual amputation of his right leg above the knee.

Zach received his specially adapted home in December 2013. He enjoys spending time with his wife Tesa and their two daughters. He also enjoys working out, playing video games, hunting, and fishing. Zach hopes to one day work at a hands-on job in his hometown.

Sgt Stinson would like to thank all of the donors and volunteers who made his specially adapted home from Homes For Our Troops a reality. “I cannot put into words what an amazing gift this is to me and my family. It allows me the freedom to be more independent in my own home and helps my wife to relax about leaving me at home with our daughter. I am able to move around my home without restrictions and gain back my independence. Thank you so much.” 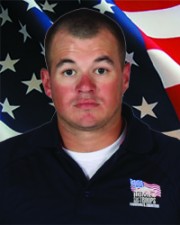