Jeremy Stengel joined the military to serve his country after the September 11th attacks. He enlisted in the Marines as an Infantry machine gunner with the Mobile Assault Platoon (MAP), Weapons Company, 2nd Battalion, 3rd Marine Regiment, 3rd Marine Division.

Jan. 31, 2007, started as a typical day on a route-clearing mission for Cpl Stengel in Iraq, performing a sweep of the main supply routes in the area.  Jeremy and three other Marines were in the vehicle providing rear security when they struck an improvised explosive device (IED). Jeremy lost his left leg and sustained severe muscle and nerve damage to his right leg.

Now medically retired, Jeremy plays wheelchair basketball and is an avid SCUBA diver. He is a member of the VFW post in his hometown, Waterford, Wis. Before receiving his specially adapted custom home, he was not able to freely utilize his wheelchair due to narrow hallways and doors.

Since receiving his HFOT home, Jeremy has had the financial freedom and independence to achieve his goals. He graduated from Bryant and Stratton College in 2018 with a degree in occupational therapy, and he now works at a nursing home/rehab facility. He was inspired to pursue the field after going to therapy during his recovery. Most importantly, Jeremy has gotten married to his wife Georgia since moving into the home, and they now have a son, Leo, and are expecting their second child. The open concept of the home enables Jeremy to safely raise his children with Georgia. In his free time, he enjoys working with wood in his workspace in the garage.

Jeremy is grateful to HFOT donors and supporters who helped make his life easier. “For a group of people to do this for returning injured Veterans, you are true Americans. Your continued support helps not just the Veterans, but it also helps out their families. Thank you.” 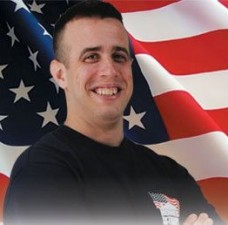