With a long line of military family history and a passion for service, Stephen “Mark” Smith signed up for the Marines shortly after graduating from high school.

On Oct. 14, 2006, while on his third combat tour, Sergeant Smith was on a patrol with the 1st Battalion, 6th Marines in Ramadi, Iraq, when he stepped on a land mine. The blast resulted in the loss of his left leg below the knee, right lower leg nerve damage, chronic back pain, and a traumatic brain injury (TBI). Mark’s wife, Tabitha, believes that the determination Mark has was instrumental in his recovery. Shortly following his surgeries, Mark was eager to learn how to use a prosthetic and begin walking once again.

Now medically retired, Mark enjoys spending time with Tabitha, and their daughters, Margaret, and twins Lilian and Evelyn. When Mark is not busy with working and raising a family, he enjoys brewing his own beer. He is also a lifetime member of the Marine Corps League and the Military Order of the Purple Heart. He would like to one day raise chickens to have fresh eggs and teach his children responsibility. He also finds raising chickens to be therapeutic.

Mark still lives a life of service as a state trooper. In August 2014, he graduated from the Georgia State Patrol Trooper School, and was the first amputee to go through the school. Mark realizes this is a career that requires physical strength and agility that he may not always be able to do. A specially adapted custom Homes For Our Troops home enables Mark to rest and recover at home in his wheelchair, giving him more energy while he’s on duty. The financial freedom of a donated HFOT home also makes it easier for Mark to provide for his family and give them safety and security. In his previous home, after a long day at work, Mark struggled with standing on his legs for lengthy periods, resulting in Tabitha doing most of the chores and tending to their children. To be able to come home and still function as a husband and a father is a great relief for Mark.

Originally from Georgia, Mark chose to remain in his home state to be close to family.

Mark feels humbled to be part of the HFOT Family and grateful to everyone who contributed to the building of his home. He and Tabitha are thankful for the new start in life. “One of the best gifts to give is the gift of always having a place to come home to where Veterans are safe and secure.” 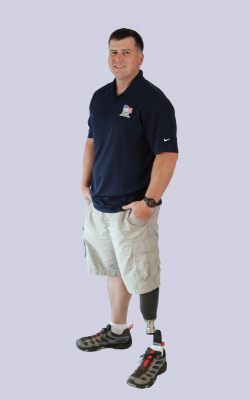