On May 5, 2010, Marine Corporal Tyler Southern was on his second deployment with the Weapons Company, 81s Platoon, 1st Battalion, 2nd Marines, when he lost both of his legs above the knees, his right arm above the elbow, and shattered his left arm and hand after stepping on an improvised explosive device (IED) in Musa Qala in the Now Zad District of Afghanistan. Having no recollection of what happened prior to the blast, Cpl Southern has been told by his squad members that he stepped on a 10 pound, pressure plate IED while searching for insurgents in a walled compound. Lifesaving measures at the scene readied Cpl Southern for his evacuation to Camp Bastion Hospital in Afghanistan while squad members secured the area.

After being airlifted to Landstuhl, Germany, Tyler was transported to Bethesda Naval Medical Center where he spent nearly two weeks in a coma, awaking to find his family surrounding his hospital bed, including his two brothers, both active duty service members.

Cpl Southern is an avid movie fan. He also enjoys football, motorcycles, hanging out with friends, and spending time with his son and daughter. Tyler’s family is very important to him and he says they have been an integral part of his recovery process.

Tyler says, “This unthinkable gift gives my family the freedom to live without the constant worry of whether or not I will be okay on my own. I cannot express in words how much I appreciate this gift. Thank you, Homes For Our Troops and your supporters… you will never know how much this means to me and my family. Your hearts are in a great place. This gift of a specially adapted home is monumental to me and my future, and my family’s future. This home will give me the freedom to go anywhere or do anything in my own home without any assistance, making my injuries a distant thought. THANK YOU, HFOT!“ 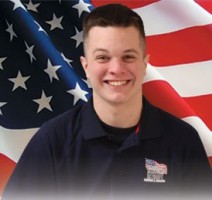