During his second deployment to Iraq, Marine Corporal John Smith lost his right leg and the vision in his left eye during the first Battle of Fallujah on April 12, 2004. Cpl Smith, an Infantry rifleman, had just returned from conducting a sweep of the city with the 2nd Platoon, Echo Company, 2-1 Marines. A mortar round landed in the center of his unit’s defense, hitting Cpl Smith. The shrapnel and explosive percussion ripped through his body, causing him to go into shock and become disoriented. His corpsmen acted quickly to evacuate him and the other casualties. The last words he remembers hearing before passing out were his fellow Marines saying, “We got you, Marine. You’re safe now.”

Cpl Smith spent the following four weeks in a coma. He was evacuated to Landstuhl, Germany where his right leg was amputated. Once back in the States, he was treated at Brooke Army Medical Center in San Antonio and Walter Reed Medical Center. Cpl Smith describes his recovery as “a slow start with a miracle result.” When he awoke from his coma, he was told he would never be able to use his hands again and he would be in a wheelchair the rest of his life. With faith and support from friends, Cpl Smith says he was able to walk, write and slowly “regain a little bit of normalcy” in his new life.

Now medically retired, John keeps busy with many creative projects like mixing and mastering music, art, photography and film. He is currently working on an associate’s degree in music engineering as the first step towards a bachelor’s degree.

Despite his remarkable recovery, John still faced challenges in his daily life in his previous home. He says his Homes For Our Troops home gives him financial stability, allowing him to pursue his goals. He also says the automatic doors and open floor plan are beneficial for when he is in his wheelchair. Most importantly, the home enables him to spend more quality time with his fiancee, Idera, and their son and young daughter.

Originally from Pennsylvania and New Jersey, John chose to have his home built in Southern California. After living and visiting other places across the country, he says the Golden State is the only place that feels like home.

John is extremely grateful to the donors, sponsors and supporters who provided him with a home adapted to his injuries. “The world is full of empty promises, but to know that a group of people are willing to stand in the crosshairs for us when we can no longer do so, brings a warmth to my heart I haven’t felt in a longtime,” he says. “A lot of us come back damaged goods; most write us off because the war isn’t on TV any more, giving PTSD and other ailments room to grow and prosper. The love you show to us Vets is the cure, and I can feel the love, as I’m sure many other before me have.” 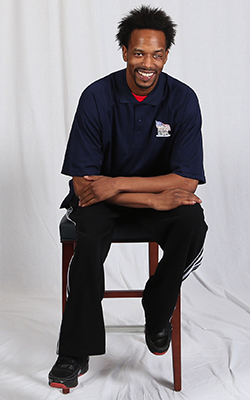