Glen Silva joined the Marines as an Infantryman in 1990 with the desire to serve a greater purpose. He did two tours in Iraq in 2003 and 2009, before deploying to Afghanistan in 2010.

On Oct. 12, 2010, Gunnery Sergeant Silva was the operations chief on a foot patrol with the 1st Battalion, 8th Marines, in Afghanistan when he stepped on an improvised explosive device (IED). The blast resulted in the loss of his left leg; severe damage to his left arm and abdomen; the partial amputation of his left fingers; broken teeth; traumatic brain injury (TBI); and other severe injuries.

During his recovery, Glen was stationed at Bethesda Naval Hospital and Walter Reed Army Medical Center for three years. Throughout that time, he assisted Servicemembers from all branches undergoing recovery, helping them understand their injuries and teaching them leadership skills. Glen often referred other severely injured Veterans to the Homes For Our Troops program because he felt they deserved a home more than he did. After meeting his fiancée, Heather, he finally applied with the desire to safeguard the future for his family.

Medically retired in 2015, Glen spends most of his time camping and traveling with Heather and their four children. He enjoys public speaking, assisting other Veterans, and engaging with them to give them the tools they need to continue to better themselves.

Because his previous home was a non-adapted apartment, Glen was forced to wear his prosthetic at all times. He often became discouraged because the apartment was not suited to his needs, making it difficult to recover. Glen feels relieved now that he is able to use his wheelchair in his specially adapted custom Homes For Our Troops home. He has the freedom to remove his prosthetic leg and perform tasks around his home, thanks to special adaptations including wider doorways and pull-down shelves. He looks forward to rebuilding his life and focusing on his family, a luxury that he didn’t always have. Heather no longer worries about Glen’s safety. In their previous home, Heather often feared Glen would fall or hurt himself, especially when showering.

Originally from Colorado, Glen chose to build in Pennsylvania to be close to family and for the low state taxes. Glen says, “I can never say thank you or put into words how much this incredible opportunity means to me and my family. It enables me to breathe a little easier and takes something else off my stressing list.” 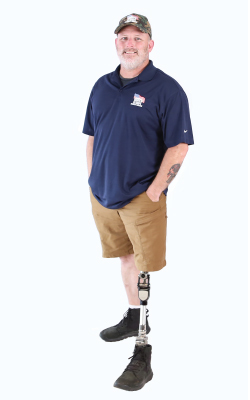