John “Christopher” Short was a sophomore at the University of Arkansas during the September 11 terrorist attacks. Witnessing the horrific events unfold on American soil, Christopher was motivated to enlist in the military. He joined the Army as an Infantryman with the 2nd Battalion, 5th Infantry, 25th Infantry Division, deploying to Afghanistan in 2004.

On March 29, 2005, during his first deployment, Sergeant Short was returning to his base when the vehicle carrying him rolled over two Egyptian anti-tank mines in Oruzgan, Afghanistan. SGT Short lost his right leg, sustained severe damage to his left limb, a traumatic brain injury (TBI), and other injuries in the blast.

Now medically retired, Christopher has come a long way in his recovery and has established a meaningful life, having overcome his challenges. He strives to stay active and enjoys fishing, swimming, kayaking, working out, canoeing, and golfing. Most importantly, he enjoys spending time with his daughter Caroline. While Christopher doesn’t let his injuries stop him from moving forward in his life, they present new problems as he ages. Coping with his injuries since 2005 has taken a toll on Christopher physically. His current home is not wheelchair accessible, which forces him to wear his prosthetic for long hours, causing him much pain. He also risks injuring himself further since he has to hop on one injured leg getting in and out of the shower. Most of all, Christopher becomes disheartened when his daughter has to help him around the home. Receiving a specially adapted custom Homes For Our Troops home will enable him to rest and recover safely, allowing him more quality time with his daughter. “I want to give Caroline more of an opportunity to be a kid because she helps me a lot,” he says.

Regaining his independence within his home will give Christopher the time and energy to give back to his community. He has volunteered with several organizations including Veteran’s Villages of America and the Arkansas Freedom Fund. Since moving to Florida, he has gotten involved with Team Semper Fi, Wake for Warriors, West Palm Beach Veteran’s Golf Club at First Tee, and the Veteran’s community fishing program.

Originally from Arkansas, Christopher is choosing to build his home in Florida, where he currently lives, for the warm climate and Veteran-friendly community.

Christopher wants HFOT’s donors and supporters to know their contributions will be going toward a worthy cause. “When you help a Veteran heal, you are not just helping that Veteran and their family, you are also helping a community heal as well as this country. This program sets the recipients up for long-term success and independent living. I can’t think of a better cause, can you?” 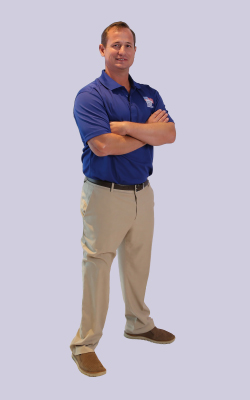