Army Staff Sergeant Samuel Shockley was on a dismounted route clearance mission in Panjwai, Afghanistan with the 38th Engineering Company when he triggered an improvised explosive device (IED) on March 17, 2013. He recalls looking at where his legs should have been and they were gone.

As his fellow Soldier and friend began applying tourniquets and preparing him for MEDEVAC, SSG Shockley – a naturally vibrant person – began cracking jokes to ease the concerns of his comrades. The blast resulted in the loss of both legs above the knee, the amputation of part of his middle and ring fingers, the loss of part of his arm and a broken wrist. Despite his list of injuries, Samuel doesn’t see it as a stopping point, but a second chance at life.

Samuel and his wife Emely say a specially adapted home is life-changing. In their previous home, Emely worried about leaving Sam alone in case he needed assistance. Samuel says he benefits greatly from the shorter cabinets, wider doorways and hallways, and the roll-in shower.

Sam and Emely would like to adopt children and animals so they can share what they have with God’s creatures. They already have five dogs – two Boxers, a Puggle, English Bulldog and a Chihuahua. Samuel grew up riding horses and would love to have one of his own again.

Samuel received his degree in Operations Management from The Ohio State University and is now pursuing his Master Degree of Business Administration (MBA) at Washington State University. He also hopes to get his pilot license. Emely is a full time MRI technician.

Samuel thanks his supporters for caring about him and Emely through all the hard times. “By giving us this home you are giving us more hope and strength that life is not over when you lose so much. I want to thank everyone for everything they stand for and not forgetting about us,” he says. 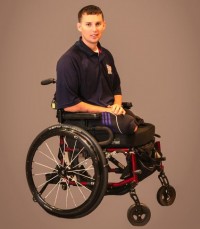