In an effort to steer his life in the right direction, Yevgeniy “Yev” Shenker joined the Marines as an Infantryman after graduating from high school in 2005.

In 2011, during his first combat deployment, Marine Cpl Shenker was on a clearing effort in Sangin District, Helmand Province, Afghanistan, with the 3rd Battalion, 5th Marines, 1st Marine Division, when an improvised explosive device (IED) detonated, injuring Cpl Shenker and six of his comrades. Cpl Shenker lost his left leg and sustained severe damage to his right leg and arm.

Once back in the United States, Yev chose to be treated at Balboa Medical Center in San Diego for the remainder of his recovery to be closer to his unit when they returned.

Now medically retired, Yev and his wife Maggie are proud parents to their sons William and Luka. When he’s not spending time with his family, Yev enjoys building, repairing, and riding Harley Davidson motorcycles. He is interested in exploring other activities in his community, and intends to live life to the fullest. He recently got back into an old hobby of building computers. Having a donated, specially adapted custom HFOT home gives Yev the financial freedom to expand on his interests and go to trade school for metal fabrication.

In their previous home, the doorways were narrow, making it difficult for Yev to use his wheelchair. Maggie often assisted him, but Yev was still determined to be independent and often hopped around to navigate throughout the home. As insistent as Yev is to do things for himself, he still got frustrated when he was not able to perform daily tasks. Cooking was especially challenging for Yev because it required him to wear his prosthetic for long stretches of time, which often becomes painful. Additionally, Yev had difficulty using the steps to enter and exit the home.

A new specially adapted custom home gives Yev and his family a safe environment and peace of mind. He is grateful to have plenty of space to entertain family and friends and hopes his home will act as a safe haven for Veterans. Most of all, Yev is happy to be able to play in the yard with his sons. Yev watches his youngest son, Luka, full-time while Maggie works from home. He loves getting to spend the extra time with his son, but often became discouraged when he could not take him to play outside because of the rocky landscaping around their previous home.

Originally from Kansas, Yev chose to build his HFOT home in Queen Creek, Arizona, for the area’s excellent school system.

Yev wants HFOT’s donors to know he is incredibly grateful for their generosity. “Your kindness brings happiness to so many Veterans who have been struggling since their injury. What you all do for us is truly selfless and gracious. From the bottom of my heart, I can’t thank you enough for the gift of a safe place, a home.” 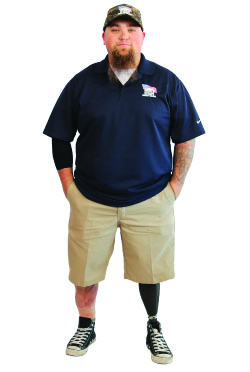