Air Force Staff Sergeant Keith Sekora has been serving his country in various ways since 1988.  First, he enlisted with the United States Army and served for ten years before leaving to achieve his dream of becoming a police officer. Three years later, after the Sept. 11 attacks, Keith again felt called to serve his country and enlisted in the United States Air Force Reserves as an explosive ordnance disposal (EOD) technician.

On Nov. 5, 2010, during his second combat deployment, SSgt Sekora was on an EOD combat mission with the 20th Special Forces Group in Afghanistan, when an unknown object struck him in the back of his neck. This, along with being involved in other blasts, resulted in a severe traumatic brain injury (TBI), four massive strokes, and several other injuries.

Today, Keith is a member of the Paralympic archery team. Although Keith has a great attitude, his previous home presented daily challenges and risks. Partial paralysis, vertigo, and double vision made the stairs in his home a particular challenge and safety issue.

Keith also cannot feel temperature due to his traumatic brain injury. One feature of his specially adapted custom home that he enjoys is the shower with digital temperature control. This prevents Keith from burning himself, further complicating his recovery.

Keith says the gift of receiving a specially adapted Homes For Our Troops home is life-changing. He has spent time and money making modifications to his former home, but it still was not fully accessible. “Being able to live my life fully independent puts my mind at ease,” he says.

Originally from Maryland, Keith chose to build his home in Washington State.

Keith is incredibly grateful to HFOT’s donors and supporters. “Homes For Our Troops is amazing. This home gives me independence, security, and the freedom of knowing my family is taken care of,” he says. “It helps not just one Veteran, it serves the whole family.” 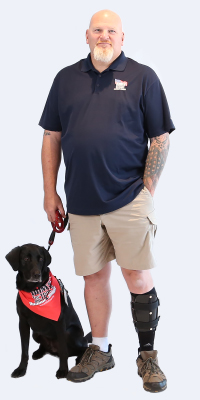