Jereme Sawyer always wanted to serve in the military, so he joined the Washington National Guard as a cavalry scout when he was 17 years old and still in high school.  Years after finishing his National Guard duty, he still had the urge to be in uniform, so he joined again, this time in the Army as a motor transport operator with the 296 Brigade Support Battalion, 3rd Stryker Brigade Combat Team attached to the 5th Battalion, 20th Infantry Division.

On April 3, 2012, during his second deployment in Helmand Province, Afghanistan, Sergeant Sawyer was struck by a reverse pressure plate improvised explosive device (IED). The IED was buried below a t-wall barrier, and was detonated when the t-wall was lifted off the ground. The IED blew when SGT Sawyer was walking next to the t-wall, overseeing its removal.

SGT Sawyer’s right leg was severed immediately and his pelvis was fractured in several places. His platoon acted quickly, applying tourniquets and getting him medically evacuated. He was taken to Afghanistan, Germany, Delaware, and finally to San Antonio Military Medical Center where he underwent multiple surgeries, including the amputation of his left leg.

Now medically retired, Jereme previously rented a home that was not accessible. He was unable to move around the bathroom and the kitchen, especially when he had company over. His previous home was also carpeted, which was very difficult to navigate in a wheelchair. Jereme is happy to be living in a specially adapted custom home with hardwood floors, a kitchen with cabinets he can reach, and a safe bathroom with roll-under sinks and a roll-in shower. He is relieved that both he and his mother, who is his full-time caregiver, have their independence back.

Jereme says an HFOT home gives him closure, knowing he has a permanent place to live and that enables him to go back to school and get involved with his community. His long-term goals include going to welding school. “I am grateful and feel very blessed to have received this home. It means a lot more independence for me and enables me to take my life back. Homes For Our Troops is a second chance, this is a chance for me to start my life,” he says. 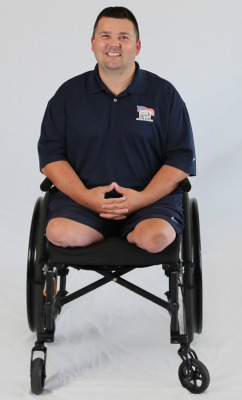