On Sept.16, 2006, Marine Sgt Christopher Santiago was on his 3rd deployment when he lost both of his legs and severely injured his left arm and hand when he stepped on an improvised explosive device (IED) while opening the gate to a Forward Operating Base (FOB) after returning from a night mission in Saklawia, Iraq.

Having felt uneasy as if something bad had been in the general atmosphere for a couple of days, Sgt Santiago was pleased to be returning to base after a day-long mission, followed by an unexpected late-night mission. Telling his radio operator to stay behind, Sgt Santiago exited the HMMWV to open the concertina wire gate, a job usually performed by the radio operator. As he scanned the adjacent field and street, he stepped on an IED that had been buried at the gate.

Never losing consciousness, Sgt Santiago began checking himself for injuries and began to realize the dire condition he was in. Calling out to his fellow Marines to let them know he was alive, Sgt Santiago recalls the looks of horror on the faces he passed as he was carried to the medical room on base, his friends visibly shaken. The first medical helicopter sent to evacuate Sgt Santiago to the forward surgical site was disabled on landing and a second helicopter had to be dispatched. Chris recalls the doctors saying they would need to amputate his legs before he slipped into a coma for nearly a week.

Eventually transported to Landstuhl, Germany, Chris remained there for several days as doctors worked to stabilize him for the trip home. Spending two months at Bethesda Naval Medical Center, Chris was next moved to Walter Reed Army Medical Center where he would spend nearly a year recovering after more than 50 surgeries.

Chris enjoys spending time with his two young sons, Robert and Christopher, reading, and studying financial history subjects. After earning his bachelor’s degree in global business and public policy with a minor in Finance through the University of Maryland University College, Chris obtained a master’s in finance from Johns Hopkins University in 2018. He is now working for Capital One’s financial innovation team and is pursuing a second master’s in analytics. He is a member of the Disabled American Veterans, Seeking Alpha Contributors, Veterans of Foreign Wars, and American Association for Individual Investors.

Chris would like to thank all of the donors and volunteers who made his specially adapted home from Homes For Our Troops a reality. 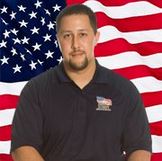