On Jan. 12, 2012, Marine Cpl Joshua Sams was on a routine foot patrol in Kajaki, Afghanistan with his unit when he stepped on an improvised explosive device (IED), resulting in the loss of both his legs, a broken arm and a broken pelvis. Following behind three of his teammates who had just walked ahead of him without incident, Cpl Sams recalls taking a step and moments later, seeing nothing but dust around him.

After the blast, a feeling of weightlessness overcame him. Still conscious and communicating with his team who was working on him, he was then loaded onto the helicopter for medical evacuation to Landstuhl, Germany. In the weeks and months of rehabilitation that followed, Joshua would progress on his prosthetics and eventually return to his active lifestyle.

An avid outdoorsman, Joshua enjoys hunting, fishing, four-wheeling, attending sporting events and being at the beach. He is working as a dispatcher for the Clinton County Sheriff’s Office and sits on a couple boards in his town. Joshua is grateful for the opportunity to have received a specially adapted home suited to his needs.

Since moving into his HFOT home in 2015, Josh says his quality of life has improved significantly. He has been able to focus on furthering his career and take up activities such as biking. “Everything in the home is specially designed to mitigate risk to myself while carrying out daily chores and life activities. Having a walk-in, wheelchair accessible shower, roll under countertops in the kitchen and master bathroom, and pull down shelving in the kitchen cabinets are some of the adaptations to the home that have been most beneficial to me. I love my home and the freedom it allows me,” he says. 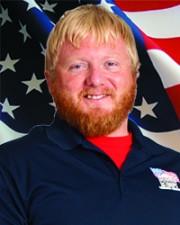