On Sept. 16, 2010, Army Staff Sergeant Jose “Freddy” Ruiz was on his third tour in Afghanistan serving as personal security detail with the 1st Battalion, 66th Armor Regiment when an improvised explosive device (IED) caused his vehicle to roll over multiple times. As a result of the attack, SSG Ruiz sustained a severe injury to his head, traumatic brain injury (TBI) and extremity fractures.

The TBI was the most severe of SSG Ruiz’s injuries. He describes his recovery experience as being “reborn.” SSG Ruiz had to relearn all basic functions including walking, eating, and talking, while coping with the emotional, behavioral and social challenges caused by his injuries. While he has made significant progress in his recovery, he still loses his balance and has difficulty with cognitive functions. “Every day is a struggle, but I won’t give up,” he says.

Freddy’s specially adapted custom home from Homes For Our Troops mitigates some of those everyday struggles for Freddy. Since his balance is unstable, the accessible shower with bars and rails ensures a safe bathing routine. Freddy says it took him some time to become motivated to be active after his injury, which is why having a larger living space is important to him. Navigating small areas was troublesome for Freddy in his previous home, so the new home’s open floor plan and spacious rooms make it easier for him to live comfortably and instill more confidence to be mobile.

Having more space at home – as well as a garage – allows Freddy to pursue his hobbies. He and his father enjoy carpentry and painting together, but the two found it difficult in his previous home given the limited workspace for tools. Freddy would also love to have a yard to raise chickens and goats one day. The new space and the financial freedom that he enjoys in his new home affords him the opportunity to pursue this dream. Freddy’s other interests include fishing, sled hockey, wheelchair soccer, and playing drums.

Originally from Dallas, Texas, Freddy is choosing to remain in the state and build his home there to be close to his family.

Freddy says his life has changed significantly since his injury. “I have lost a lot of my old friends since the accident because the TBI changed my personality and my life. But it’s people like HFOT’s donors and supporters who make me feel important and loved again; it’s a remarkable feeling.” 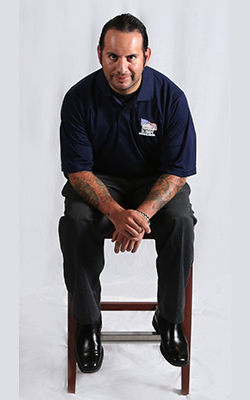