On March 29, 2012, Marine Corporal Roger Rua was serving with the Security Platoon attached to the 9th Engineer Support Battalion when the vehicle he was riding in drove over a command detonated improvised explosive device (IED) in Helmand Province, Afghanistan. Cpl Rua sustained fractures to his spine, femur and sternum, and traumatic brain injury (TBI) as a result of the explosion.

Initially paralyzed from the chest down, doctors were uncertain if Roger would walk again. But after four months of physical therapy at the VA in West Roxbury, Massachusetts, Roger was able to stand and eventually walk small distances with assistance. By the time he was discharged, Roger was managing to walk with only a cane, progress he credits to the support and love he received from family.

Although there has been significant improvement in his health, Roger’s chronic lower back pain and injuries often affect his quality of life and mobility. He also experiences frequent severe headaches. Roger and his wife Angela are now parents to two children, Vincenzo Michael, and Emilia Jane. In his previous home, Roger could walk up and down the stairs carefully and slowly while holding the railing, but he often worried about being able to carry his children while doing so. The slightest of falls could have devastating consequences due to his past spinal injuries. An adapted home from Homes For Our Troops, free of hazards such as stairs and thresholds, enables him to live independently and safely, while allowing him to rest his back. Having a fully accessible bathroom with grab bars and a shower bench also eases Angela’s concerns about Roger’s safety when she is not home.

Roger says that not having the financial burden of a mortgage enables him to focus on his education and career. He obtained a degree in national security from the University of New Haven in 2017 and currently works for the government. He is also a certified fire arms instructor on weekends, hoping to turn it into a business venture.  The stability of a permanent home, he says, relieves his stress and anxiety about providing for his family.

Roger’s hobbies include cycling, running, as well as playing golf, and darts.

Roger expresses his sincere thanks to all of the Homes For Our Troops’ supporters: “The fact that HFOT helps Veterans build back up their lives and makes their dreams come true is something that brings so much hope to all of us. Without the support from donors, none of this would be possible,” he says. 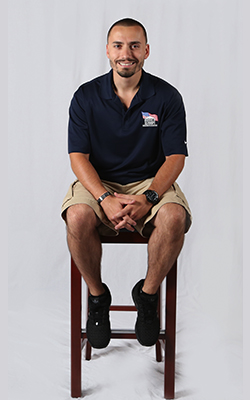