On Jan. 26, 2005, during his second deployment while moving with A Company, 1-8 CAV, 1st Cavalry Division in Baghdad, Army Specialist Roberto Reyes Jr. was ejected 20-feet in the air from his vehicle after it was struck by an improvised explosive device (IED).

The impact of his fall and shrapnel embedded in his head from the explosion resulted in severe traumatic brain injury (TBI) and partial paralysis. At the time, doctors at Walter Reed told SPC Reyes’ family that he probably only had 24 hours to live.

Now medically retired, Robert remains in the guardianship of his aunt, Maria Mendez-Valentin. Together with her husband Carlos, the two try to provide Robert with a nurturing and loving family as he continues to recover from his life-altering injuries. But since their previous home was not wheelchair accessible, and Robert requires full time care and spacious accommodations for his medical equipment, they had no choice but to place him in residence at a VA facility in New York. This meant traveling back and forth to see him from their home in Pennsylvania.

Having a specially adapted home, one equipped with a lift system that can move Roberto in and out of bed is a godsend to Maria and the family. He now has room to freely navigate his wheelchair inside the home and go outside and feel the sun, too. He is even able to bathe and shower in the privacy of his own home, unlike his previous residence which required his daily care to be outsourced at another facility. But best of all, says Maria, he is able to spend holidays together carving turkeys and opening presents with the family-at home. “Thank you from the bottom of our hearts,” says Maria on behalf of Robert.

Robert used to love playing football and wrestling prior to his injuries. Maria says her goal in life is to be able to watch Robert cook. She looks forward to helping Robert rebuild his life through the gift of a specially adapted home from Homes For Our Troops. 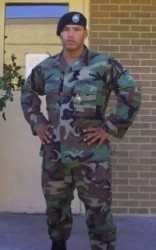